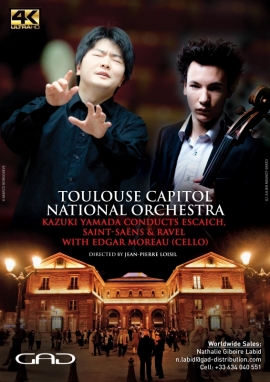 Three composers present a history of French music, of its colors and its moods. From the renaissance of French music with Camille Saint-Saëns, via the masterpieces of Maurice Ravel to contemporaries such as Thierry Escaich, young French cellist, Edgar Moreau, laureate at the last Victoires de la Musique, and conductor Kazuki Yamada, admirer of this repertoire, invite us to discover some dazzling scores.

Grand Prix winner of the 51st Besancon International Young Orchestral Conductors competition in 2009, Kazuki Yamada is now one of the most prominent conductors of his generation. For his fourth consecutive season guest appearance on the Orchestra du Capitole podium he will conduct a repertoire dear to his heart: one of French music.

Cello prodigy, Edgar Moreau, aged just 21 has already won numerous prizes and awards. In particular, he was nominated “Instrumental Soloist 2015” at the Victoires de la Musique Classique. Already a solo performer at the age of eleven with the Orchestra of the Teatro Regio of Turin, he has since pursued an international career with the most prestigious of orchestras such as the Moscow and Saint Petersburg Philharmonics, the French National Orchestra and the Berlin Philharmonic.

SAINT-SAËNS / Concerto for cello and orchestra n°1 in A minor, op.33