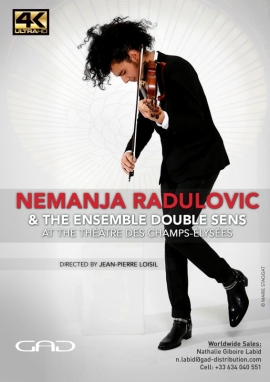 JOHANN SEBASTIAN BACH - Concerto for violin and strings in A minor, BWV 1041

The ebullient Franco-Serbian violinist and his Double Sens Ensemble celebrate Bach and his concertos in a Parisian temple of classical music. His long, dark-black hair, his tattoos and his “bohemian look” make him an atypical performer on the international circuit of major soloists. However, his virtuosity is the foremost characteristic of his playing and makes him one of the most engaging of artists. This is once again demonstrated with a concert in Paris at the Théâtre des Champs-Elysées entirely devoted to Bach, which is a platform illustration of his latest album, one of the major recording events of the start of the 2016 season.