Auguri by Oliver Dubois at the Théâtre National de Chaillot 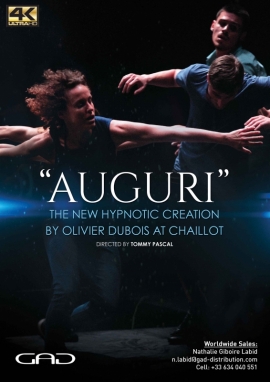 The new hypnotic creation by Olivier Dubois at Chaillot

When the race becomes an absolute vital necessity, a frantic quest for happiness. Twenty-two men and women on stage unleash themselves in an eruption of jubilation and anguish.

AUGURI is a whip crack of joy. The latest creation by Olivier Dubois¾and the finale of the trilogy Etude critique pour un trompe-l’oeil¾creates a “mystic theorem”. After the long and sublime march of Tragédie, his previous piece, here we have man’s race towards an absolute… happiness. With the extravagance we know of him and twenty-two performers, AUGURI promises to be the latest explosion from the master of the subject. The man who enjoyed a dazzling and deserved rise is here trying to find the springboard, the takeoff point to break free from gravity. Not to forget the ensemble-being! In an irresistible quest for the sensation of… happiness. An activist for the “intelligence of sensation”, Olivier Dubois strives to inspire enchantment by seeking, through the paths of men, an unfolding destiny, a secret humanity that can be read like the auguries of ancient times. Currents, counter-currents, birds, shelters, winds, abduction and furies are the guides on a frantic quest.