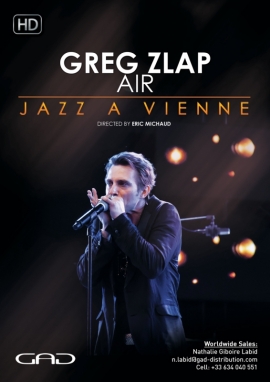 Grzegorz Szlapczynski, alias Greg Zlap, is a Franco-Polish harmonica player and singer originating from Warsaw. Szlapczynski arrived in Paris at the end of the 1980s with his little harmonica in his bags. He joined his first bands and discovered the clubs of Paris while still a student at Jussieu. Gifted and charismatic, Zlap quickly found the opportunity to hone his talent on the harmonica alongside those of Jacques Milteau (pure chance) and Olivier Ker Ourio. Greg became a sought-after session musician. In the studio or on stage, we saw behind Johnny Hallyday and in television studios with Francis Cabrel, Maxime Le Forestier and Charles Aznavour. An open and inventive composer, Zlap created a surprise in 2002 with La Part du Diable [The Devil’s Share], an album with electro overtones that the magazine Le Point described as “one of the best Blues album’s of the moment, in the style of St Germain or Erik Truffaz”. At Vienne he exudes a real desire to share, with inevitable fine solos in a Western mood, but he also plays his favorite pieces with his band of buddies in a “Buddy Guy” spirit. His latest opus, Air, recorded in Warsaw is in a vein closer to jazz.