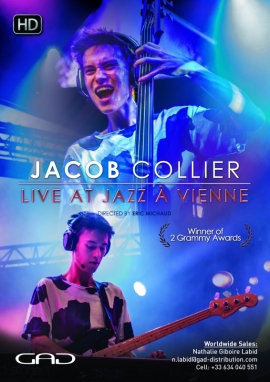 The young protégée of Quincy Jones, Jacob Collier, already noticed by Herbie Hancock and Chick Corea at Montreux, is perhaps one of the most talented young popular musicians of his generation. Now based in London, Jacob takes inspiration from a variety of sounds to make an infinity of classics his very own, from Gershwin to the Beatles by way of Stevie Wonder. Both an exhilarating multi-instrumentalist and an out-of-this-world vocalist, the Londoner creates a masterly blend of jazz, a-cappella singing, trip-hop, human beatbox, classical and Brazilian music, gospel, soul and funk.

Great art! In just a few years, his multi-facetted videos, viewed millions of times by more than 100,000 subscribers to his YouTube channel, have become his personal trademark. He creates them in his own studio, sings all the parts and plays all the instruments while simultaneously displaying each part of the number on screen by using a mosaic. As his first album, hailed by his mentor Quincy, is released, the young virtuoso is about to celebrate only his 21st birthday this year.

with “You And I” and “Flintstones”

for Best Arrangement, Instrumental or A Cappella