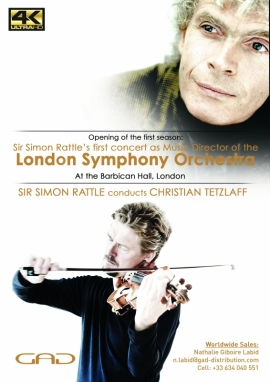 Famed for the profound sincerity of his playing, his technical assurance and his convincing interpretations, Christian Tetzlaff is internationally recognized as one of the most important violinists on today’s musical stage. For this opening concert of the 2017-2018 season, entirely devoted to 20th century British composers, he will perform Birtwistle’s concerto for violin.

After making his debut in the United States with the Cleveland Orchestra, conducted by Christoph von Dohnanyi, he played with the Munich Philharmonic Orchestra conducted by Lorin Maazel and Leonard Slatkin in 1997.

Christian Tetzlaff was accompanied by the National Orchestra of France for the first time in 2000 in Arnold Schoenberg’s Concerto conducted by Jeffrey Tate and is a regular guest with the Vienna and Stockholm philharmonics and the Boston and Chicago orchestras as well as the London Symphony Orchestra.