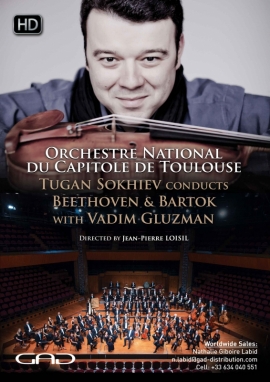 Two visionaries, outsiders in their time… These might be the common points between Ludwig van Beethoven and Bela Bartok. The Concerto for violin and orchestra in D major, performed by the tempestuous Vadim Gluzman, is a testament to Beethoven’s genius. The two composers, both guided by a strain of patriotism free of nationalism, both maintaining complex relationships with the authorities, were unanimously considered to be geniuses.

The extraordinary talent of Vadim Gluzman is steeped in the great violin tradition of the 19th and 20th centuries, matched with modern dynamism. The Israeli violinist performs throughout the world with the foremost orchestras, under the baton of renowned conductors. His wide discography has won many awards: Diapason d’Or of the year, Choc Classica, Disk of the Month (ClassicFM, Strad and BBC Music Magazine).