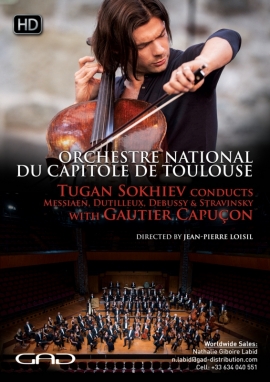 DUTILLEUX          A Whole Distant World, for Cello and Orchestra

Cellist Gautier Capuçon, an intimate of Henri Dutilleux, had the idea, with Tugan Sokhiev, of a homage to the French composer, born a hundred years ago. And so, his master piece A Whole Distant World now converses with three major “classics” of the preceding century: Messiaen, Debussy and Stravinsky, three musical giants amongst whom Dutilleux holds a legitimate place.

Amongst the most sought-after of the younger generation of French cellists, Gautier Capuçon is a regular guest with prestigious orchestras throughout the world, such as the Berlin Philharmonic, the London Symphony, the Chamber Orchestra of Europe and the New York Philharmonic. In 2001, he was named “Fresh Talent of the Year” at the Victoires de la Musique. Gautier Capuçon also performs recitals and chamber music. And for several years he has been working with the Orchestre Nationale du Capitole.