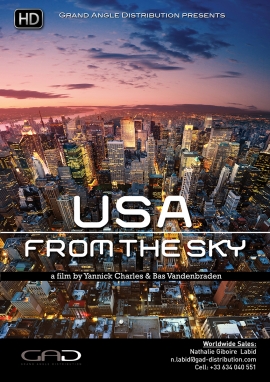 Filmed in HD, the “Coasts of the United States from the Sky” is a panoramic journey along a coastline that it is both one of the wildest in the world and one of the most sought after.To approach America from the sky, along its coasts, is a new way of discovering the extreme variety of marine landscapes of the United States. 20,000 kilometers of beaches, steep coastlines or swamps, from desert areas to the most urbanized of spaces. Few countries in the world can boast of such shores: the cliffs and sequoia forests of North California answer the long beaches of Florida, the Bayous and swamps of Louisiana contrast with the wild coasts of Maine. And the cities? Here we find the most amazing megalopolises of the planet: Los Angeles and New York. And there are many others too, such as San Francisco, New Orleans, not to mention Miami, San Diego, Seattle and Boston, strung along the American coastline.

Great cities that buzz, seduce, revitalize. And the myths? Among the not-to-be-missed locations in the culture and history of the United States are, of course, Key West, right at the tip of the United States, the highly esteemed islands of Nantucket or Martha’s Vineyard on the East Coast and, more popular, the seaside resort of Daytona and its world-famous motor racing circuit. And what can you say about Malibu, Venice or Manhattan Beaches, the most famous in Los Angeles, California?