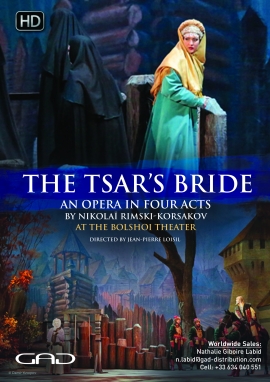 Based on the drama by the poet Lev Aleksandrovitch Mey

Moscow, in the year of our Lord, 1572. Grigory Gryaznoi, an important member of the Tsar's guard, is denied the hand of lovely young Marfa, daughter of the merchant Sobakin. In fact, Marfa is promised to Ivan Likov, whom she has loved since their childhood.

Lioubacha, the mistress of Griaznoi, despairs because he no longer loves her. She decides to take revenge on Marfa with the help of Bornelius, the Tsar’s doctor.

The wedding of Marfa and Ivan must temporarily be postponed because the Tsar is looking for a wife and he wants to meet Marfa.

During the engagement of Marfa and Ivan, Griaznoi makes Marfa drink what he thinks is a love potion. But Lioubacha has substituted a potion to destroy Marfa’s beauty.

Before the effect of the potion becomes visible, the Tsar’s guard interrupts the party: the Tsar has chosen Marfa for his future wife, she must join him immediately.

On the eve of her marriage with the Tsar, Marfa, under the influence of the potion falls ill. When Griaznoï and Lioubacha reveal their plot, the young woman sinks into madness.