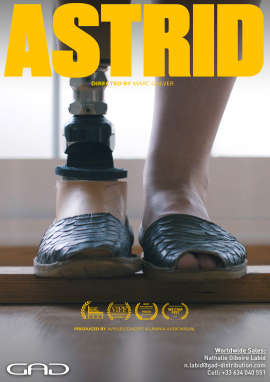 Astrid is the name behind a story of misfortune and a life-changing incident. The protagonist of this documentary lived a quiet and humble life until a near fatal accident led to the amputation of her right foot.

After countless tests and many obstacles, Astrid has come out on the other side holding a Paralympic medal to show for all her effort.

This story speaks of the emotional and professional journey, which inevitably and completely transforms a person to the point where Astrid is a different person from who she was in the beginning.

The accident, the 13 surgeries that followed, the decision to amputate, getting up and walking again, pushing through the frustration of the first and disastrous descents and the larger than life effort to improve, to get back up and keep going. This is Astrid.

A story, another story, and not for that matter less exciting and frenetic, that shows us that what matters is not so much where we begin or where we are going, but what happens to us on this journey and what we do with it, along with everything we live through from one moment to another.

On one end we have a broken young woman and on the other, a champion on the floor crying with emotion for having won a Paralympic Games.

"Public choice award" at the We Cam Fest in Colombia

“Best sport documentary” at the BKK DOC in Thailand

“Best documentary” at the Inclús Film Festival in Spain

"Special Mention" at the Buenos Aires Indies Festival in Argentine