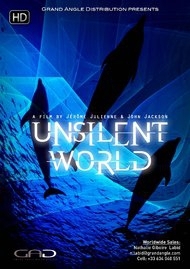 If you listen to “The World of Silence” with the super-powered ear of a marine mammal, you are immediately drowned in growling, groaning, wailing and whistling. In this world where vision is limited to twenty metres, everything is communicated by sound… a world that is one hundred times louder than a tropical forest. So imagine two dolphins in conversation: “Pikuit to Stuito”… “Pikuit to Stuito”… “Let’s go and fish at the same rock as yesterday!” “Stuito to Pikuit!”… “I’ll go ahead and I’ll send you the radar image!” It sounds like science fiction! And yet it’s totally real… As you will discover from the many experiments conducted “in the field” for “The Unsilent World” in Hawaii, Honduras and Florida by the foremost experts on whales and dolphins! It also explains how whales can converse at a distance of 4,000 kilometres… and much, much more! But beware! Danger! From the snowstorms of the Arctic Ocean to the naval base of La Spezia in Italy, we discover that the most sinister of pollutions is under way. Invisible, unknown to the general public, it is about to render this world mute. The 50,000 props of cargo ships Wildlife that permanently criss-cross the planet, the underwater seismic searches for oil that bombard the oceans’ floors with explosions twice as loud as a jet fighter taking off and, even worse, the low-frequency sonar used by NATO in the hunt of submarines, of which a single blast can “empty” a zone of 100,000 km2 of its inhabitants… are but the initial examples of the noises that these “sonar” animals are subjected to everyday. If this inferno of noise continues, then… no longer able to communicate or guide themselves, marine mammals will be forever condemned to wander where chance takes them in the permanent fog of the oceans! An inevitable decline! A revelation!