FROM THE MEDITERRANEAN TO SOUTH AFRICA, SEEN FROM THE SKY 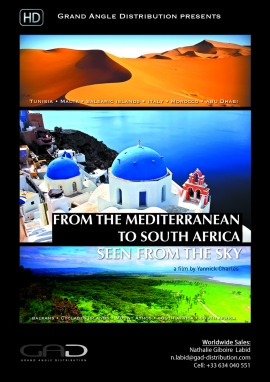 It’s the most beautiful, the bluest, the hottest, the most desired and sometimes the most disputed. A synonym for conquest and exchange, the Mediterranean is laden with history and hopes. Seen from the sky its coastlines relate the epic adventures of a world gone by, the contradictions of a world on the march. Archaeological remains, island refuges for populations in transit, sublime cities, unspoiled natural spaces, the Mediterranean Sea is multiple and unique. Another destination on the edge of the Persian Gulf in Abu Dhabi where the Arab Emirate is constantly expanding and modernising. What other country in the world has changed so much these last thirty years? In the far south of the African continent another country continues to change: South Africa, with two oceans as its borders, the Atlantic and the Indian. From the Cape of Good Hope to the Namibian border, from Cape Town to the famous “garden route”, we soar above a magical country of magnificent and grandiose landscapes, of some of the most varied shores in the world. Morocco, Tunisia, Balearics, Malta , Italy , Mount Athos, Corfu & the Cyclades, Balkans , Abu Dhabi, South Africa, South Africa