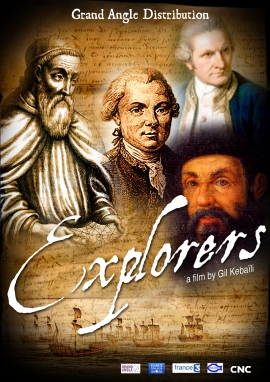 The “Explorers” series shows how Europe plotted the maps of America and the Pacific between the 15th and 18th centuries. From these three prolific centuries of exploration, five illustrious characters stand out, standard bearers of some of the greatest voyages in the history of humanity. Five explorers for five films, each lasting 13 minutes:
• Amerigo Vespucci from Genoa, who gave his name to the “New World”.
• Magellan from Portugal, who, in the fury of the high seas, discovered the passage around this new continent and unlocked the door to a new ocean.
• Bougainville from France, who made France’s first round-the-world trip in the footsteps of Magellan.
• La Pérouse, who needs no introduction, was sent by King Louis XVI in response to the English domination of the seas.
• James Cook from England, the most illustrious navigatorexplorer of all time, who accomplished three trips to the Pacific in search of the Austral continent!