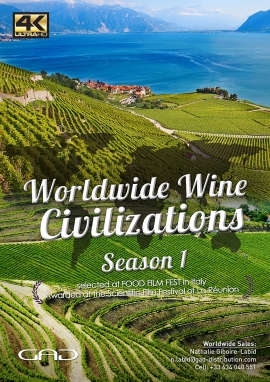 The fruit of a long history, of a natural environment and of the labors of those for whom it is a passion, each vineyard tells the tale of a unique civilization. Worldwide Wine Civilizations is an exceptional documentary series devoted to exploring winemaking regions around the globe. In addition to delving into a region’s wine production, each episode will also explore local history, its architecture, art, science, techniques, and a host of other subjects. Worldwide Wine Civilizations will feature breathtaking 4k aerial cinematography of the world’s most picturesque winemaking regions. With each episode, the spectator will be plunged into the heart of a winemaking civilization in Europe, South America, North America, Asia, and Polynesia. This series will take viewers on a voyage through time and space, seeking out and discovering past and present civilizations, exploring their grandiose natural environments and their complex and multifaceted cultures.

Awarded at the Scientific Film Festival of La Réunion, in the category “Science Plus”